“Hank” Albarelli’s important book, A Terrible Mistake: The Murder of Frank Olson and the CIA’s Secret Cold War Experiments, has helped many people realize just how expansive and out-of-control MKUltra and its many sub-projects were, and how significantly they may have effected American society and our rule of law. My co-host, Mack White, and I interviewed him twice many years ago. He will be missed …

For centuries, science dismissed the paranormal as coincidence without seriously looking at it. The materialist paradigm of science did not allow for the possibility of psychic abilities and the survival of consciousness after death. But a new period of scientific enlightenment is emerging. The forces of cosmology and physics indicate that the existence of our universe is all but impossible, yet we perceive it around us. Statistical research shows us that previously inexplicable phenomena are real and that what was viewed as the paranormal is actually normal. Out-of-body and transcendental near-death experiences are forcing science to reform its old notions about the brain and consciousness. Often taking root in quantum physics, there is now quiet, but increasingly pervasive, scientific evidence for what has been called spiritual.

Gary will expand and take a deep dive furthering his 2017 presentation made at INACS. If you are intrigued by the magic of psychic intuition and life after death and want to know what scientific research now says on the topic, here is a chance to explore how science and spirituality—once considered mutually exclusive—are beginning to say the same things with different vocabulary.

Plus Gary’s bonus report on this year’s International IONS Conference.
TIME and LOCATION for this event:

THE SPEAKER: Gary G. Preuss, Ph.D., is a scientific and spiritual visionary. Gary worked for thirty years as an economist and statistical analyst. He grew up on a farm outside El Campo, Texas, U.S.A., earned degrees from Rice University and Georgetown University, experienced a month of silence as a novice in the California Province of the Society of Jesus (Jesuits), and holds a doctorate in Parapsychic Science from the American Institute of Holistic Theology. Gary is owned by two dachshunds in Austin, Texas.

Check out all the links below in our News-Headlines section in this edition of the newsletter as well as the many more articles you can find at our Anomaly Archives Flipboard page.

Book Of The Week

A Terrible Mistake:
The Murder of Frank Olson and the CIA’s Secret Cold War Experiments 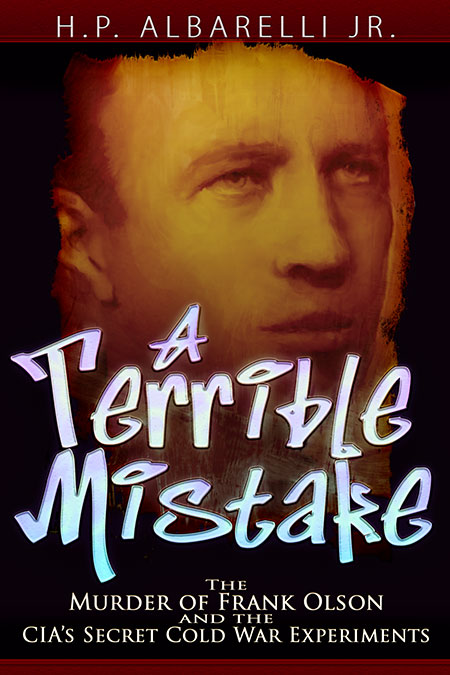 Following nearly a decade of research, this account solves the mysterious death of biochemist Frank Olson, revealing the identities of his murderers in shocking detail. It offers a unique and unprecedented look into the backgrounds of many former CIA, FBI, and Federal Narcotics Bureau officials—including several who actually oversaw the CIA’s mind-control programs from the 1950s to the 1970s. In retracing these programs, a frequently bizarre and always frightening world is introduced, colored and dominated by many factors—Cold War fears, the secret relationship between the nation’s drug enforcement agencies and the CIA, and the government’s close collaboration with the Mafia.