From Mermaids to Little Green Men:
The Prehistory of the UFO Abduction Phenomenon
by Jerry Clark
“Does the available evidence sustain the testimony of today’s abductees that gray UFO beings were snatching people up decades ago? The evidence is not overwhelming. On the other hand, it is not entirely nonexistent.”

Reading the Strangeness:
Second-Order Anomalies
by T. Peter Park
“On the night of November 2, 1967, several people unknown to each other who had been drinking beer had very similar close encounters on roads near Ririe, Idaho with “little men” from UFO’s trying to forcibly enter their cars. Almost exactly ten years earlier, on November 6, 1957, spacemen from UFO’s tried to steal dogs from a boy named Everett in Tennessee and from a man in Everittstown, New Jersey. Are such sets of events mere coincidences–or do they reflect deep patterns with special meanings for their participants, or even for the world at large?”

The Best UFO Case Ever?
A Review and Update of the Socorro Incident
by Patrick Huyghe
“Until policeman Lonnie Zamora’s sighting made the news in 1964, all other accounts of meetings with the space people came from witnesses of dubious credibility and reputation. And their stories were laughable. Zamora’s story was different. He was a policeman, a highly credible witness. So with this case, the widespread feeling–even among UFO believers–that there was something absurd, if not ludicrous, about humanoids, simply crumbled.”

More here at the Source: The Anomalist 8: Table of Contents

The Psychic Life of Malcolm X
by Robert J. Durant

The Saturday Evening Post summed up the conclusion of white America, and a substantial portion of black America, in this comment about the publication in 1964 of The Autobiography of Malcolm X: “If Malcolm X were not a Negro, his autobiography would be little more than a journal of abnormal psychology, the story of a burglar, dope pusher, addict and jailbird — with a family history of insanity — who acquires messianic delusions and sets forth to preach an upside down religion of ‘brotherly hatred.'”

Spike Lee’s motion picture about Malcolm X triggered a revival of superficial and mendacious media interest in the phenomenon of the man who was everything the Post said, but much, much more.

In July, 1996, at the MUFON Symposium held in Greensboro, North Carolina, Budd Hopkins was disturbed by my paper about pop cultural influences on the imagery of alien abduction. He approached me and said, “You’re not an abduction researcher!” I reminded him that he used information about an abduction I had investigated in his first book on the topic. I have been investigating alien abductions since the mid-1970s and apparently before Hopkins started.

Four years later, that same comment was made, even after having published a number of articles on the topic, and having written two books about abduction. The second of those books, The Abduction Enigma, written with Russ Estes and William P. Cone, has created something of a firestorm, with many attacking without attempting to understand the reason the book exists.

Source: The Anomalist 9: Table of Contents 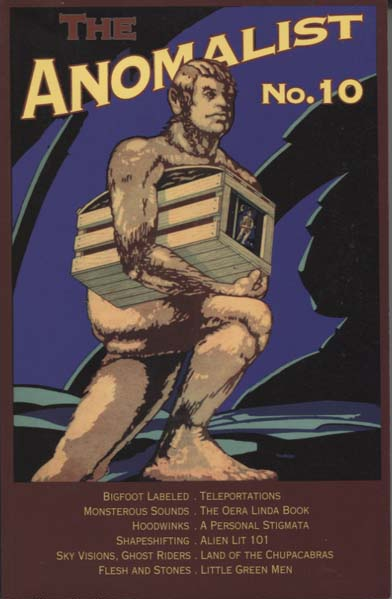 Bigfoot Labeled: A Depression-Era Image from California Discovered
by Loren Coleman
“One measures a circle, beginning anywhere, said Charles Fort. If so, then perhaps we can learn more about California’s experience of Bigfoot through lettuce. Lettuce? Yes, lettuce, or rather a crate label for lettuce. Actually, it’s a fruit crate label. Let me explain, backing up just a bit first. . .”

Monsterous Sounds: A Field Investigation of Texas Bigfoot Vocalizations
by Chester Moore, Jr.
“The devil himself couldn’t have made more frightening, vile sounds. An enraged cacophony of growls, yells, and grunts broke the silence of the darkened forest and stirred the very core of my 12-year-old soul. My father and I were rabbit hunting near a creek bottom in the deep pine forests of Newton County in East Texas and happened upon some thing that didn’t appreciate our being there. With each passing moment the noisemaker seemed more agitated as it increased the intensity of its furious-sounding cries. . .”

A Personal Account of a Stigmata
by Robert J. Durant
“As an airline pilot, I am required to take a physical examination every six months. This is a fairly simple test of blood pressure, hearing, vision and that sort of thing. The exam must be administered by a physician certified by the Federal Aviation Administration. FAA medical examiners are not that common, and those in my vicinity require an appointment, usually a month or so in advance. My flying schedule tends to be erratic and unpredictable, making it difficult for me to meet these appointments. The following events occurred in the summer of 1990. . .”

Source: The Anomalist 10: Table of Contents