Self-Experiments with Consciousness and Hypnagogia:
A scientist’s personal exploration of consciousness at the threshold of sleep and beyond
by Sirley Marques Bonham, Ph.D. 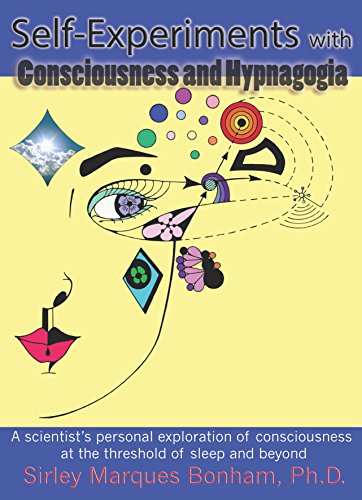 “This book tells about the author’s personal experience with subjective phenomena of the human mind and consciousness, with special emphasis on phenomena perceived at the threshold of sleep and wakefulness, known as hypnopompic and hypnogogic experiences (or in short “hypnagogia”), which she considers quite special, as it will allow a person to maintain awareness, or lucidity, while the physical body falls asleep, therefore having the chance to explore out-of-body experiences and lucid dreams. However, it is not all about out-of-body experiences or lucid dreams, as she tells about her personal experiences from her involvement with esoteric philosophy and the Brazilian spiritism, and discusses several special issues from the development of her knowledge on other subjects, like for example remote viewing, starting with her involvement with the Society for Scientific Exploration where she met with the first explorers and the initiators of remote viewing research. The author also improved her knowledge of the mind through her involvement with neuroscience, as well as psychological theories of cognition, and research on memory and learning. Her personal experiences also lead her to study the literature on the subject of bio-energetic phenomena (the so-called Kundalini phenomena) and other interesting areas that address the subjective phenomena of the mind in many forms. One important subject discussed is that of “sleep paralysis,” which can produce problematic hypnagogias. In fact she has published a scientific paper, along with Jean-Christophe Terrillon, on recurrent sleep paralysis, which has been widely referred in the literature on this subject, after its publication by the Journal of Scientific Exploration in 2001. This paper is included in the book as an appendix, due to its importance in helping people suffering from this condition. Finally, this book assesses the present panorama with personal subjective experiences in general, which the author strongly believes may produce important developments in the understanding of the mind and consciousness in general, consequently increasing the possibility of experiencing the worlds beyond the physical, or beyond death.”