It’s been a couple of weeks since the last issue… the newsletter will likely continue along in the near future in irregularly scheduled installments.

Successful anomalous events organized by and/or featuring friends and acquaintances have recently occurred across North America – sadly, I wasn’t able to attend any of them. These ranged from the Cryptozoological Dogman Symposium organized by Ken Gerhard (and featuring Nick Redfern, Lyle Blackburn and others) to the East Coast Paracon (featuring friends Greg Bishop, Paul Kimball, Aaron Gulyas, Tim Binnall, and others) and down here in Texas, theEdinburg “Out of this World” UFO Festival (organized by Noe Torres and featuring David Hatcher Childress, Nick Redfern, Ben Hansen, Lynne Kitei, and Stephen Andrasko).

Sadly, the field of UFO inquiry has lost another great seeker… Errol Bruce-Knapp. Many in the field of (what passes for) UFO “research” won’t know who he is but they should. I came to know of him through his moderation of one of the oldest and most important UFO email lists, UFO UpDates (Archives 1996-2013). You can learn more about him (including his involvement in off-shore Pirate Radio DJ years) and his important contributions facilitating communication and hosting a community of UFO truth seekers by listening to these interviews here (on the Spectrum Radio Network), and here (with fellow Canadian Paul Kimball). He hosted several terrestrial radio shows and transitioned to internet streaming and podcasting his Strange Days… Indeed (and Mind Shift) programs. I was honored to be a guest on his show back on September 11th, 2007 (MP3). Good luck finding all of his wonderful interviews of some of the best UFO researchers. Here you can listen to him talk with legendary Area-51 researcher Glen Campbell(MP3), who hosted Errol’s UFO UpDates list site (and maintains the Archives).

“It’s alive… ALIVE!!” Austin Mufon has been resurrected as MUFON-ATX.

A couple of weeks ago I was surprised to learn that the local MUFON (Mutual UFO Network) chapter had been re-launched and begun monthly meetings held way up in the furthest reaches of North West Austin. I was involved in Austin Mufon from about 1990 until 2012 when its chain of leadership was finally broken. I led the group from about 1999 – 2002.

Above: Robert Powell “shares about cases from Georgia, England, Utah, Iowa, New York, and Canada as well as information on the process of UFO investigations.”

I was excited to learn of these new monthly meetings and attended the second such meeting held on July 31st. The meetings are at 7pm on the last Sunday of each month at Palm Beach Vapors. July’s meeting featured Austinite and Mufon’s Director of Research / Founder & Leader of Mufon’s Science Review Board. Also present were Texas Mufon leaders Steve Hudgeons (Director of Investigations & former State Director of Texas) and Teresa Turner (State Director of Texas – and State Section Director). There were about a dozen attendees from around Austin and outside the Central Texas metro area. The highlight of the meeting was getting a sneak peak of Robert Powell’s upcoming presentation for the annualMufon Symposium 2016 – Orlando, FL – August 25th-28th whose theme is “UFOs From Our Oceans to Outer Space.” Robert’s presentation is MUFON’s Top 10 UFO Cases for 2015. You can watch this sneak preview thanks to another attendee I was glad to meet, Daniel Jones of the Vortexas Network, whom I’d briefly met a few months ago in Dallas at the ParaMania event.

For this installment of the Book-of-the-Week we feel it appropriate to highlight the aforementioned Robert Powell’s contribution to the printed knowledge-base of UFO history. Robert was kind enough to speak about that history to our Anomaly Archives audience in his Lecture in 2014 (Video).

Our Monthly Public Meetings Are Changing! We Need Your Help! Why Not Volunteer? We’re transitioning our monthly public meetings into volunteerism opportunities. I’ll be up at the Anomaly Archives Saturday, August 27th from 1-3pm to train new volunteers on various on-going processes as well as upcoming special volunteer projects.

The Anomaly Archives holds Monthly Meetings on the Fourth Saturday of Each Month. Contact SMiles Lewis via email for updates. The meetings are held from 1-3pm at the INACS / Anomaly Archives headquarters located in North West Austin.

Coming up in September, the Anomaly Archives will be holding its annual Free Lecture Event. This year’s talk will be presented by former military Remote Viewer Paul Smith. Details Coming Soon! 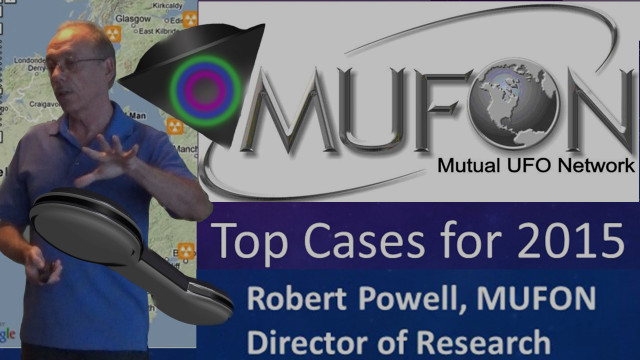 “MUFON Director of Research Robert Powell gives a presentation on Top Cases for 2015 during a MUFON meeting in Austin, Texas on Sunday, July 31, 2016. Robert shares about cases from Georgia, England, Utah, Iowa, New York, and Canada as well as information on the process of UFO investigations.”

“Governments have been concerned about UFO sighting reports since WWII, but historians have never made a concerted attempt to understand their often contradictory responses to the phenomenon. How could something of such potential technological and national security consequence have left no visible trace in the history books? Whether it’s a conspiracy or not, the subject has been marginalized to such an extent that it’s as if the military never acted with alarm on the heels of a UFO sighting, as if the intelligence community never took up the issue behind closed doors, as if government research and development efforts never attempted to duplicate the phenomenon. But they have. Robert Powell will discuss how governments, especially the U.S. government, have dealt with the UFO phenomenon and will provide a hypothesis as to why the phenomenon took its roots during WWII.”
Robert Powell’s Anomaly Archives Lecture 2014 (Video): UFOs & Government: The Historical and Changing Role of Government over Time