Here’s wishing you all the best for the New Year!

We hosted our first Open House with tours of the new facility, a lecture by Nick Redfern on his new book (Top Secret Alien Abduction Files) and a Holiday Party afterwards. We had a wonderful time at this multifaceted event. A full-house greeted our guest speaker Nick Redfern after Bob Price and SMiles Lewis gave introductions to our respective organizations. These talks were recorded and should be available soon at our website and YouTube channel. In the meantime you can view a few photos at the Website.

Besides videos of Nick Redfern’s recent talk and SMiles Lewis’ organizational introduction lecture coming soon, we’ll also be posting video of Barb MacLeod’s Mayan-State-Sponsored-Shamanism presentation from last year as well as our archival footage of Texas’s ParaCryptozoologist Treasure: Rob Riggs. And there is more to come…

In the meantime, here is video of SMiles Lewis’ presentation to the Anomaly Archives monthly meetup circa September 2017 about his February 2016 Mystery Hum Experience.

PLUS, another Cargo Culture video… As a close friend was leaving the other night, something in our conversation sparked his memory of a pop song dealing with themes of suppressed experience … about an abduction that was really a close encounter portending utopian future realities, thousands of creatures in cities of light without hate … but the man is pressured by the powers-that-be to: Keep it dark!

This week’s selection is a book that I’ve recently read, cover to cover, over the holiday weekend. I’ve not read a physical book this fast in years. I’ve been wanting to read this book for several several years and so it felt good to kick back with a more fast and loose narrative storytelling tome than stodgier types of nonfiction. It explores paranoid themes of gang stalking, possible covert government / military / law enforcement / corporate espionage, hi-tech R & D exploitation of “invisible” people by “invisible midgets” a la the invisibility cloak suit of the alien in the Predator movies. I recall the wave of negative comments in the online Fortean Times forum about the featured cover article that promoted the book. Regardless of the veracity of the book’s most spectacular claims, it is an excellent launching pad for more discussion and an entertaining read by an author / researcher of whom more people should be aware.

Keep It Dark
Song by Genesis
Lyrics
Found that man reported missing,
He wandered in his home.
It don’t seem to bad if you consider
Just what he’s been through.
Seems he met up with a gang of thieves,
Who mistook him for a man of means,
They locked him up then found he had no money,
So they let him go again.
Now he’s back at home and happy
Just to see the kids.

I wish that I could really tell you
All the things that happened to me
And all that I have seen.
A world full of people their hearts full of joy,
Cities of light with no fear of war,
And thousands of creatures with happier lives,
And dreams of a future with meaning and no need to hide.

It seems strange to have to lie,
About a world so bright.
And tell instead a made-up story,
From the world of night.

I wish, that I could really tell you,
All the things that happened to me
And all that I have seen,
A world full of people their hearts full of joy,
Cities of light with no fear of war,
And thousands of creatures with happier lives,
And dreams of a future with meaning and no need to lie,
No need to hate,
No need to hide. 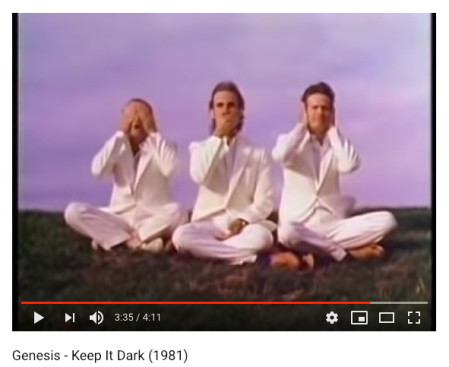 A light rock song, it describes a man who has been to the future and has seen a bright, happy world where everyone is filled with joy, cities are filled with light, with no fear of war, and all exploitation has ceased as all creatures have happier lives. Once he returns, however, he is pressured to lie about the incident (i.e., to “keep it dark”). Instead he claims that he was kidnapped by thieves who wanted to take his money.[citation needed]. The cover depicts the three wise monkeys.

In the DVD interview accompanying the 2007 re-release of Abacab, the album from which the song comes, composer Tony Bankssaid that “the idea was that this character had to pretend that he’d just been robbed by people and that’s why he’d disappeared for a few weeks, and in fact what had happened [was] he’d been to the future and gone to this fantastic world where everything was wonderful and beautiful and everything… but he couldn’t tell anybody that, because no one would believe him and the powers that be kept him silent.”[citation needed]

The song’s structure is unusual: the rhythm is in a 6/4 time signature, with a distinctly syncopated rhythm guitar part. Lead singer Phil Collins sings in falsetto for certain lines of the song.[citation needed] The pace overall, particularly the drums, is similar to the album’s title track.

A music video supported the single release of the song, featuring Collins, Tony Banks, and Rutherford in two different settings. In the first and second verses and the fade out, the band walks along bleak city streets (in Amsterdam) wearing trenchcoats and fedoras. When the chorus comes in, it shifts to the band wearing all-white suits and sunglasses, and walking through a field, with the sun shining. In both settings, Banks mimes with a mini Casio keyboard and Rutherford with the neck from a guitar, while Collins keeps the beat of the song with drumsticks, mostly hitting air, or the walls of the Amsterdam houses.

Watch the Video: Keep It Dark

Book Of The Week

A Strange But True Story of Invisible Spies, Heroin Addiction, and Homeland Security

“A mesmerizing mix of Charles Bukowski, Hunter S. Thompson, and Philip K. Dick, Chameleo is a true account of what happened in a seedy Southern California town when an enthusiastic and unrepentant heroin addict named Dion Fuller sheltered a U.S. Marine who’d stolen night vision goggles and perhaps a few top secret files from a nearby military base.

Dion found himself arrested (under the ostensible auspices of The Patriot Act) for conspiring with international terrorists to smuggle Top Secret military equipment out of Camp Pendleton. The fact that Dion had absolutely nothing to do with international terrorists, smuggling, Top Secret military equipment, or Camp Pendleton didn’t seem to bother the military. He was released from jail after a six-day-long Abu-Ghraib-style interrogation. Subsequently, he believed himself under intense government scrutiny — and, he suspected, the subject of bizarre experimentation involving “cloaking”— electro-optical camouflage so extreme it renders observers practically invisible from a distance of some meters — by the Department of Homeland Security. Hallucination? Perhaps — except Robert Guffey, an English teacher and Dion’s friend, tracked down and interviewed one of the scientists behind the project codenamed “Chameleo,” experimental technology which appears to have been stolen by the U.S. Department of Defense and deployed on American soil. More shocking still, Guffey discovered that the DoD has been experimenting with its newest technologies on a number of American citizens.

A condensed version of this story was the cover feature of Fortean Times Magazine (September 2013). “

And a version of the interview appeared in UFO Magazine as “To See The Invisible Man”: PDF @Archive.org