From Wikipedia, the free encyclopedia
Not to be confused with Lewwis Spence. 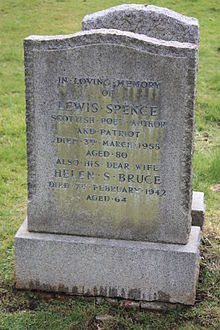 James Lewis Thomas Chalmers Spence (25 November 1874 – 3 March 1955) was a Scottish journalist, poet and author. Spence was a Fellow of the Royal Anthropological Institute of Great Britain and Ireland, and Vice-President of the Scottish Anthropological and Folklore Society.[1]

After graduating from Edinburgh University he pursued a career in journalism. In 1899 he married Helen Bruce. He was an editor at The Scotsman 1899-1906, editor of The Edinburgh Magazine for a year, 1904–05, then an editor at The British Weekly, 1906-09. In this time his interest was sparked in the myth and folklore of Mexico and Central America, resulting in his popularisation of the Mayan Popul Vuh, the sacred book of the Quiché Mayas (1908). He compiled A Dictionary of Mythology (1910 and numerous additional volumes).

Turning his interest closer to home, he investigated Scottish folklore. An ardent Scottish Nationalist, he unsuccessfully contested a parliamentary seat for Midlothian and Peebles Northern at a by-election in 1929. He also wrote poetry, collected in 1953. He wrote about Brythonic rites and traditions in Mysteries of Celtic Britain (1905). In this book, Spence theorized that the original Britons were descendants of a people that migrated from Northwest Africa and were probably related to the Berbers and the Basques.[2][3]

Spence’s researches into the mythology and culture of the New World, together with his examination of the cultures of western Europe and north-west Africa, led him almost inevitably to the question of Atlantis. During the 1920s he published a series of books which sought to rescue the topic from the occultists who had more or less brought it into disrepute. These works, amongst which were The Problem of Atlantis (1924) and History of Atlantis (1927), continued the line of research inaugurated by Ignatius Donnelly and looked at the lost island as a Bronze Age civilization, that formed a cultural link with the New World, which he invoked through examples he found of striking parallels between the early civilizations of the Old and New Worlds: the historian of science George Sarton remarked, in reviewing Spence’s Introduction to Mythology in 1921, “Prof. Smith, it may be recalled, is the chief supporter of the pan-Egyptian theory; he finds traces of Egyptian influence everywhere, even in America”.[4] Spence’s erudition and the width of his reading, his industry and imagination were all impressive; yet the conclusions he reached, avoiding peer-reviewed journals,[5] have been almost universally rejected by mainstream scholarship. His popularisations met stiff criticism in professional journals, but his continued appeal among theory hobbyists is summed up by a reviewer of The Problem of Atlantis (1924) in The Geographical Journal: “Mr. Spence is an industrious writer, and, even if he fails to convince, has done service in marshalling the evidence and has produced an entertaining volume which is well worth reading.”[6] Nevertheless, he seems to have had some influence upon the ideas of controversial author Immanuel Velikovsky, and as his books have come into the public domain, they have been successfully reprinted and some have been scanned for the Internet.

Spence’s 1940 book Occult Causes of the Present War (ISBN 0766100510) seems to have been the first book in the field of Nazi occultism.[citation needed]

He is buried in the north-west section of the 20th century northern extension to Dean Cemetery in western Edinburgh. His wife, Helen S. Bruce lies with him.

Atlantis and other lost worlds