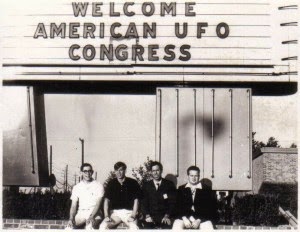 The original title of the organization was the Congress of Scientific Ufologists, but within a few years we realized that this was a pretentious title, and we therefore changed it to the present one. From the beginning, the main purpose of the NUFOC was to hold an annual meeting or convention.  Outside speakers were booked for these conventions, but there were also smaller side meetings at which actual ufological research was done.

From 1964 through 1970, Al Manak was the Permanent Chairman of the organization. There was also a small governing body which is still called the Permanent Organizing Committee (POC), the membership of which has changed from time to time over the years, to reflect whether or not its members maintained an active interest in the UFO subject.

At present, the members of the Permanent Organizing Committee are: Jim Moseley; Rick Hilberg; Karl Pflock; William Moore; Al Greenfield; Antonio Huneeus, Curt Sutherly; Timothy Green Beckley; Tom Benson; Matt Graeber; and Tim Brigham. All of these people are well known in ufological circles for various important contributions they have made to the subject.

In 1971, Jim Moseley became Permanent Chairman of the NUFOC, and remains so
till the present time. He had been a speaker at all the previous conventions, but was not a founder of the organization. He has continued to be a speaker at every convention but one, over the intervening years up until the present. Moseley has also been on countless radio and television shows over the years, and was a speaker on the U.S. college lecture circuit from 1966 to 1974.

Since the 1960s, the NUFOC has stopped doing actual UFO research on an  organizational level, and is simply devoted to staging a convention somewhere in the United States each year. There is always a Local Chairman, who undertakes the financial risk and takes care of the many details involved with planning a convention. The Local Chairman does this with whatever degree of help and advice he chooses to accept from others, including but by no means limited to Moseley and the other members of the  POC. This year’s Local Chairman is Miles Lewis, who will hold our 38th annual convention in Austin, Texas, on the weekend of September 14th-l6th -as explained elsewhere in more detail.

Most of these conventions have drawn about 150 to 400 paid attendees, but the one in New York City in 1967 was much larger. A total of about 8,000 people attended the four public sessions. This was probably the largest indoor UFO convention ever held. The enormous attendance was made possible by the fact that UFO sightings in the state of Michigan in 1966, usually called the (alleged) “marsh gas” sightings, caused a huge amount of interest nation-wide in the subject of UFOs. This peak of interest has not been seen since, with the exception of the focus on the 1997 50th anniversary celebration of the “Roswell Incident”, in Roswell, New Mexico.

Most, but not all years since 1964, the NUFOC has given an award to some leading ufologist whom we consider to be outstanding. This has variously been called the Robert Loftin Meorial Award, the Ufologist of the Year Award, or the Lifetime Achievement Award. Recipients include: John Keel; Gray Barker; Rick Hilberg; Stanton Friedman; Dr. J. Allen Hynek; Timothy Green Beckley; Jenny Randles; Antonio Huneeus; Tom Benson; Dr. Frank Stranges; Jerome Clark; Karl Pflock; Whitley Strieber; and Walt Andrus, who is the recently retired International Director of MUFON.

The National UFO Conference welcomes all reasonable ufological views, though the members of the Permanent Organizing Committee tend to be relatively conservative in their outlok on the subject. “Saucer Smear,” published since 1954 by Jim Moseley, is not an official publication of the NUFOC, and represents only his own relatively conservative views, laced with a strong dose of sarcastic humor.